Keys to the kingdom

There was a time when I longed to be a professional chef. I left home at 17 and drifted into clerical work which I came to loath and was desperate to do a job I enjoyed. Music was my first love but I simply had no clue how to make the jump from writing songs and playing them for beer money in pubs in my home town of Portsmouth to making it my living.

Gradually, cooking replaced music as a creative outlet. My interest was initially sparked by the Roux Brothers TV series and the accompanying book, which soon led to a desire to eat really good food in restaurants. An article about Terence Conran’s then just opened Le Pont de la Tour in Elle magazine (my wife was a regular reader) was literally mind blowing to a boy from Pompey to whom trout with almonds at a local bistro was the height of sophistication.

Following a birthday lunch at Le Pont, I wrote directly to Sir Terence asking how I could break in to the industry. Conran was too busy to reply himself of course but head chef of the restaurant Tim Powell got in touch and offered me a day’s stage. I’ll never forget the thrill of seeing a slice of lemon tart I made that day being sent out to the dining room.

A week’s stage with Jean Christophe Novelli at the Four Seasons followed. In the early 90’s, Novelli was a genuine hot property and cooking some seriously technical, innovative and delicious food. I worked closely with chef saucier Richard Guest (who later went on to head up the kitchens at The Castle in Taunton and is now chef proprietor at Augustus) and learnt a huge amount in a very short space of time.

It was a hard week for an office worker and I virtually crawled out of the kitchen on my hands and knees after four double shifts in a row. Despite the many difficulties the week presented (just finding a spare inch or two of work bench was hard enough) I wasn’t put off kitchens, even if Guest did make the kindly meant threat to ‘come looking for me’ if I ever decided to follow through on my dream of working in a Michelin-starred restaurant full time.

After staging at weekends at the Fifth Floor at Harvey Nichols for a few months, chef Henry Harris offered me a job. After many weeks of house hunting, my wife and I found a place and we were ready to make the move from Brighton to London. But the house deal fell through and we not only lost thousands of pounds we could ill afford but the heart to start the search again.

I had set my sights high, I wanted to work in London with the very best, move from kitchen to kitchen and build up a serious CV. In my mind, nothing else was worth changing career for. In hindsight, it was a blinkered approach, but the silver lining was that I ended up in a job that allowed me to travel the world, eat in great restaurants on expenses and work in a few of them when time allowed. Writing about those meals and experiences on what was one of the very first food blogs in the late 90’s eventually lead to my professional writing career and now the publication of my ebook Kingdom of Cooks: Conversations with Britain’s New Wave Chefs.

In a way, the decade I’ve spent writing about food drink and travel have been a substitute for being a chef, and Kingdom of Cooks is the most obvious example of that. If I’m never actually going to be a chef, then the next best thing is to write about the job, understand what it takes to be a great cook and live vicariously through my interview subjects.

For the book, I spoke at length to 14 chefs dotted around the UK and although I’ve interviewed hundreds of chefs in the past it wasn’t until writing the book that it really came home to me that chefs at the peak of the industry truly are a band apart. The commitment, drive and tenacity required to make it to the top is astonishing. 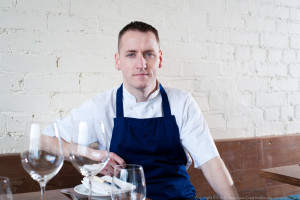 One of my favourite stories from the book is of Stephen Toman of OX in Belfast deciding one day to up sticks and move to Paris with no contacts, nowhere to stay and not one word of French. Unable to figure out the Metro and with only a Michelin guide to help him, Toman walked from restaurant backdoor to restaurant backdoor asking for work. Eventually he found it at the three Michelin starred Tallivent and then went on to work for Alain Passard among others. The single-minded audacity is breathtaking. 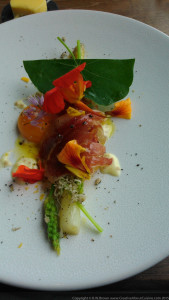 Look up the word ‘initiative’ in a dictionary and there beside it will be a picture of Stephen Toman, or at least there should be. There are many similar stories in the book.

Writing Kingdom of Cooks, I’m left with the strong impression that to be the best of the best, you have to be driven by something other than money or status. I’m not saying that the chefs I spoke to are some sort of altruistic saints, that they aren’t ambitious, hugely competitive or that they don’t want financial success-far from it. But they’re not the only things that keep them at the stove for stupidly long hours. If they only had their minds on their bank balances, they’d open a chain of steak restaurants.

I believe what really spurs them on is their creativity, their desire for perfection and their need to make people happy. But perhaps more than that, the craft of cooking is its own reward. For those chefs that achieve at the highest level there’s a profound truth at the heart of the old cliche that there’s satisfaction in a job well done.

Although I share that satisfaction when I cook at home or for paying customers at one of the pop up events I help organise in Brighton (and where I live out my restaurant-owning fantasies) I no longer yearn to be a professional chef. I love writing a menu, spending hours doing mise-en-place, the thrill of service and the satisfaction of seeing clean plates come back to the kitchen, but only occasionally. To do that everyday, and achieve national and international notoriety through it is what really separates the top professionals from the amateurs. I know which side of the kitchen door I really belong on.