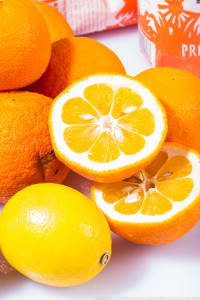 I saw them in Waitrose. 1 kilo boxes of Seville oranges and it got me thinking; how long is it since I made marmalade? Ages, that’s for sure. It’s a big topic this year, helped in some way no doubt by the Paddington movie (I have always been a fan and loved the film!).

I used to make marmalade every year when I worked at Yalbury Cottage, never enough to last but it went down well on the breakfast table. I have made kumquat marmalade for sponge puddings, a stellar dish that Peter Gorton used to do at the Horn of Plenty and I’ve made the occasional batch of jam for dishes at Sienna. A preserves expert? Definitely not!

Now my Mum, that was a different matter. We had a farm shop in Cornwall back in the early 80’s and she cooked pretty much full time for the shop. Cakes, sponges, tray bakes, hot cross buns at Easter, Christmas cakes and biscuits as well as a large range of jams, marmalades and chutneys. I remember cupboards full of empty jars, bottles of Certo and sugar by the sack. We ran a lorry to Bristol market once a week for a time taking Cornish new potatoes, cauliflowers or swedes to the market and bringing a whole range of produce back to sell in the shop. A last tour around the market after the main foray would yield the less than perfect produce for jams and chutneys; there was never any telling what would be offloaded from the van into Mum’s kitchen.

My Aunt is a keen gardener and preserver too, so when Mum’s recipe books failed to give up a marmalade recipe, it was her I rang to chat to. As we talked on the phone about life in general, she pulled out various preserving books which are used as guides but whose recipes have been adapted over the years and are covered in her notes. I had done some reading anyway and had a rough recipe in mind. Three fruits marmalade is Liz’s usual recipe (it’s my cousins favourite), but oddly she had just made a batch of Seville marmalade so the information was all to hand.

I had a really fun day pottering around in the kitchen enveloped in the smell of citrus fruit. It can be a bit of a challenge setting up to do the cooking part and the photography but good results on both fronts made it well worth while. I even avoided getting the camera and laptop too covered in marmalade!

Start by halving all the fruit and juicing it, retaining all the pips. Use a teaspoon to scrape the membranes out from the juiced fruit. Cut the skins in half again and slice off some of the white pith if it is really thick. Next slice the skins into strips, choosing whether you want a fine shred or a coarser one. The shreds will swell as they cook to an extent. I added the lemon skins to the mix, although many recipes call for just the juice and thereforeI would have to accept that maybe this means it isn’t a true Seville orange marmalade. 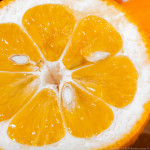 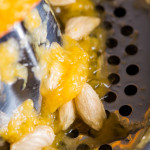 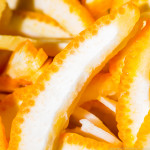 Measure the juice from the fruit and make up the quantity with water to 2 litres. Put the juice and shredded peel into a large saucepan, tie the pips and around a quarter of the membranes in the muslin and add this to the pan. Bring to a boil and then simmer until the peel is tender, around 1-1½ hours. Remove the muslin bag and squeeze all the juice out into the pan, if you have potato ricer it is brilliant for doing this! 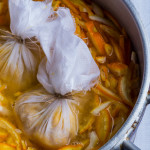 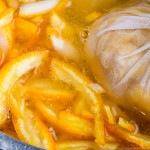 Warming the sugar is recommended in many recipes to aid the dissolving, so I placed the sugar in a roasting tin in the oven set to 100℃ for 10 minutes. I used the oven to sterilise the jars too.

Add the sugar to the pan and stir constantly until it has dissolved, then increase the heat and boil the marmalade rapidly for 5 minutes before starting to check for a set. A thermometer should register 104-105℃ or pour a spoonful onto a chilled saucer, and when the edge of the pool of marmalade is pushed the skin should wrinkle.

Once a set is achieved, pour the marmalade into the sterilised jars and seal accordingly.

I used a mixture of Kilner jars, some with the disposable lid inserts and some of the wire caged ones. Both do the job well as would recycled jars, either with screw lids or wax discs and cellophane tops. 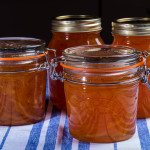 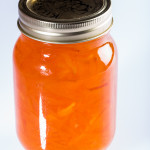 My marmalade was clear and bright, the set is perhaps a little firm so that is something to adjust, maybe taking it to 104℃ not 105. A week down the line the flavour seems to be more harmonious with a good bitter sweet balance. A few people have tried the end result now and feedback is positive! I used some in some chocolates ganache the other day and that was a real winner, a recipe for next time perhaps.