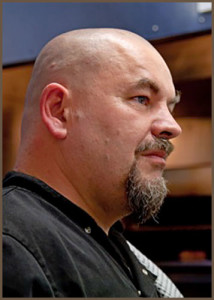 After moving to West Dorset with his family in 2002, Mat discovered that British waters offer great scuba diving opportunities, and with that came lots of fresh seafood. An interest in cooking became an obsession culminating in winning the popular TV series BBC MasterChef in 2009, then opening and running his own restaurant, The Wild Garlic, to considerable acclaim.

The Wild Garlic was given some of the highest scores ever by The Guardian 9½/10 and 9/10 by The Telegraph. It was awarded 2 AA Rosettes and was recommended in The Good Food Guide and The Michelin guide.

Mat regularly runs courses on foraging and wild plants. His courses have been featured in The Guardian and he wrote the foreword for the AA restaurant guide 2014 on food trends featuring foraging.

Mat often judges food competitions and events and is a regular judge for BBC Masterchef, The Great Taste awards and the World Cheese awards. Mat’s recipes are published in a variety of magazines including Good Food, Olive and Delicious magazines. His site: matfollas.com