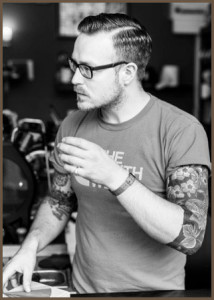 Originally from Bath, Toby spent ten years in London under the wing of Mike Belben, regarded as the founder of the “gastropub” scene with David Eyre. He discovered a passion for coffee while managing The Charles Lamb pub in Angle.

After a move to Dorset in 2011, and a bit of studying into the complex world of coffee, an opportunity to take over a shop in Dorchester came along in 2012. Number 35 Coffee House & Kitchen was born.

In 2014 Toby also opened Box Office Coffee in The Lyric Theatre in Bridport. The original idea, to showcase amazing coffee from around the world and serve in a way that maximises flavour, continues to be refined.